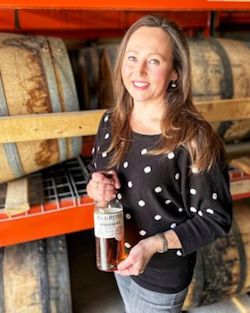 Mimi Buttenheim was named President of Mad River Distillers in Warren, Vermont in 2015. Initially tasked with expanding the brand’s distribution network throughout the Northeast, she also led the buildout of the company’s flagship Cocktail Shop in downtown Burlington, Vermont; as well as growth of the brand’s portfolio to include five whiskeys, five rums, an apple brandy and a number of annual limited-production small batch releases. In her tenure, she has overseen quintupled growth in both production and sales, as well as expansion of the Mad River Distillers brand in the beverage marketplace both on and off premise. As one of a few women in distilling, she is proud to work with the distillery’s female co-founder, Maura Connolly.

A native of New York state, Mimi graduated from Brown University with a Classics degree and earning a Certificate of Baking and Pastry Arts from the Culinary Institute of America at Greystone in California. Her time in the hospitality and beverage industry spans 20 years and both coasts, having previously filled management positions at a boutique Napa Valley winery and a craft vodka distiller. In her free time, Mimi trains her horse and competes in the disciplines of eventing and dressage. She lives in Waitsfield, VT, with her husband and two dogs.