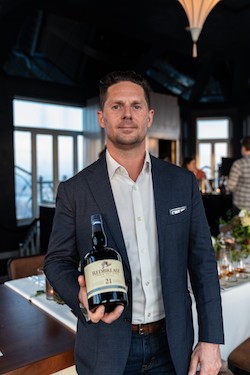 The Miami-based Whisk(e)y Brand Ambassador has honed his skills at South Florida’s best restaurants and cocktail bars, and he’s racked up a more than impressive resume. Ferrara has won a fair share of awards for his impact behind the bar: During his tenure at the Loews Miami Beach Hotel, Ferrara created celebrated concoctions for Lure Fishbar and The Rum Line, earning him a spot on the Miami Herald’s South Florida Food 50.  He’s also been dubbed one of America’s Greatest Bartenders by Thrillist and nabbed a spot on The Daily Meal’s 25 Best Bartenders in America list. His work repertoire includes Miami hotspots like Swine where he was named Best Bartender by Miami New Times and The Dutch where The English Rose won several awards for Best Cocktail.

The New Jersey native has been in the hospitality industry since his teenage days, working at restaurants throughout The Garden State: He joined the team at Avenue, an upscale bistro on The Jersey Shore, to learn the art of the craft.  Although the Bar Smarts grad moved away from Jersey, he never strayed far from the beach, originally moving south to open STK Miami in 2009, followed by taking the helm of the bar program at The Dutch, Swine, Lure Fishbar & The Rum Line.